Children have the right to protest about the climate crisis 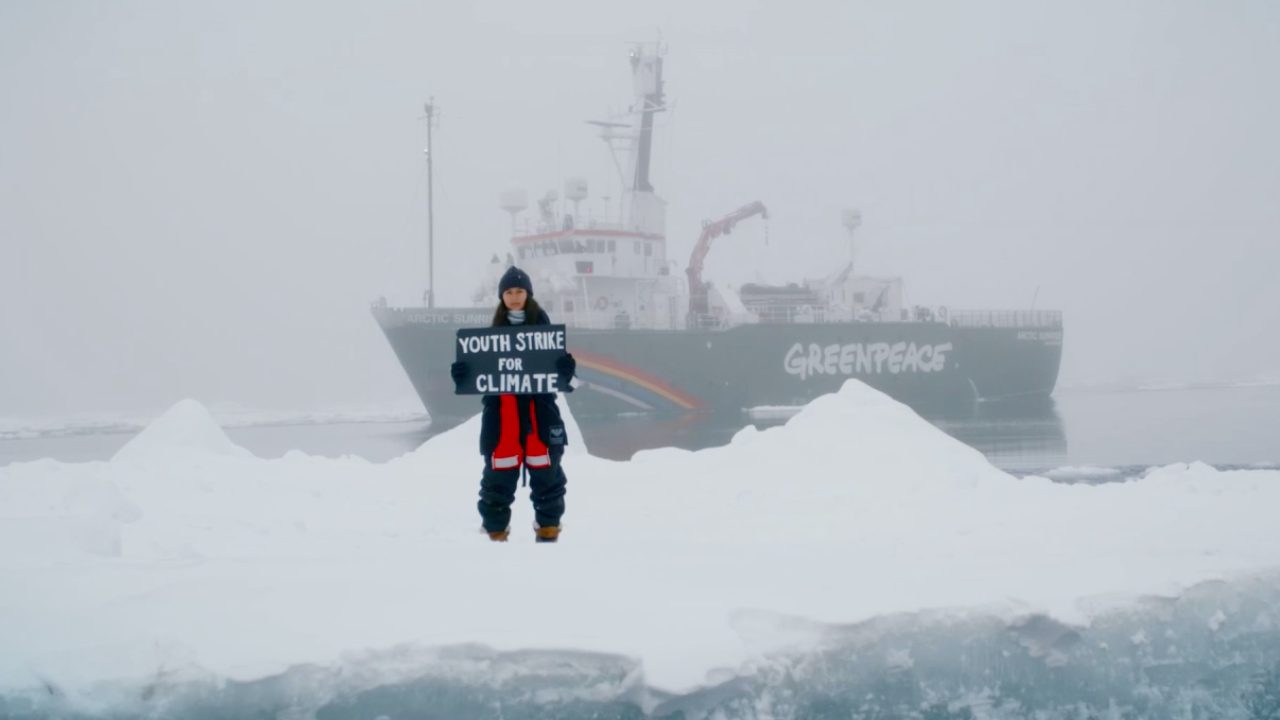 Article 15 of the The United Nations Convention on the Rights of the Child says: “Children can join or set up groups or organisations, and they can meet with others, as long as this does not harm other people.”

Our planet is home to 2.2 billion children. And we have legal rights. Rights to nutritious food, clean water, and a safe place to live. Now though, all that is at risk… from hurricanes, droughts, flooding and wildfires. The climate crisis threatens our health, our wellbeing – even our very survival.

Mya: I’m Mya-Rose, from Somerset in England, and I’ve been campaigning for action to protect the environment since I was 11 years old.

While millions of us have been taking part in climate change protests, Mya-Rose took her campaign even further… the Arctic! She went all the way to one of the planet’s ice caps, which is melting because of global warming. She travelled with the environmental campaign group Greenpeace to see for themselves the impact global warming is having.

Mya: It feels like a real tragedy to me because it’s such a beautiful place with such amazing, unique wildlife, and we’re destroying it, we’re melting it and we’re going to lose it forever before we even realise what we had. I think being on a tiny ice flow like this and just floating in the middle of a sea of slush has really just reminded me how delicate the Arctic is and all of the sea ice here.

Braydon: So what did you learn from your trip to the Arctic. Are you even more fearful for the future now?

Mya: Yeah I mean I think it was a terrifying trip just because it really felt like I was seeing the climate crisis in action. It was a really stark reminder of just how connected everything in the world is.

I know this much – global warming is caused by us humans sending harmful gases, like carbon dioxide, into the atmosphere. Those gases, from things like power stations, factories and cars, trap heat from the sun around our planet, causing it to warm up. And the most obvious effect is the melting of our ice caps. It means our ocean levels are rising, flooding other countries and affecting the world’s climate as the temperature of the water changes.

Mya: So, for example, I have a lot of family in Bangladesh, which is a country that’s been really, really badly affected by climate change, especially flooding and storms, and it was so weird to look at this ice melting on the top of the world and remember that it was affecting people back in Bangladesh, where there are four million climate change refugees in the capital at the moment. There’s extreme poverty, extreme drought and famine, and it feels like nobody’s even talking about these issues.

Braydon: There are people who are bound to question the ethics of you travelling to the Arctic in a diesel-powered boat – is that something you’ve had to grapple with?

Mya: Yeah absolutely, obviously I went out of my way for it to be as ethical as possible, the problem is that as like a climate change activist it’s always going to be slightly hypocritical to an extent, like, unless you actually separate yourself from modern society, like you’re always going to be contributing negatively to climate change in some way. But personally I knew the expedition was already happening, it was a scientific expedition, and I thought that it felt worth it on a campaigning level.

Mya Rose’s message – if you think climate change is just a problem happening thousands of miles away, and we don’t really need to worry about it, then think again. Mya-Rose is taking me to one of her favourite places, the Shapwick Heath Nature Reserve near Glastonbury.

Braydon: So, why is this place so special to you?

Mya: Well, I’m a massive birdwatcher and I always have been and as you can see, it’s amazing for birds. I’ve seen over half of the world’s bird species now, but I still love coming back to the Somerset levels to see what I can see. And if you head up into the hide with me we’ll have a look at some of them.

Braydon: Oh yes! I like this, it was a bit dark before but now look at it. So what can we actually see here?

Mya: Mainly we have a lot of ducks out here. So you’ve got mallards, you’ve got pochards, but the best bird in my opinion is called the great white egret, that’s probably about as tall as you, they’re quite big.

Braydon: Well, if you see a bird that size you’d be a bit scared, wouldn’t you? And I know that some people now call you BirdGirl, but just looking around at the moment, it looks like the birds are actually thriving – is that not the case?

Mya: The problem in the UK is that we’re running out of amazing habitat like this, because we’re building on it, but also because of climate change, we’re losing loads and loads of habitat.

Braydon: Does climate change, you know, affect the children in Somerset as well?

Mya: Yeah absolutely, if the sea rises even slightly, this entire landscape would be gone which obviously would be terrible for the birds but people are at risk too. About six years ago in 2014 there were terrible floods and people’s homes got swept away, their livestock got swept away and it really hurt a lot of people. And since then floods have become more and more regular because of climate change – it’s really damaging people’s lives, basically. It’s not just these other countries across the world that are being affected, it’s happening right here right now in the UK.

Braydon: So we’ve got to stop it haven’t we?

One of Mya-Rose’s idols is the environmental activist Greta Thunberg. And in February, they got to share a stage at a Youth Strike for the Climate event, here in the UK.

Greta Thunberg: World leaders are behaving like children so it falls on us to be the adults in the room. We will not be silenced because we are the change and change is coming whether you like it or not.

Mya: It was literally one of the coolest days of my life. I knew she was coming to Bristol but I never expected to get the email asking me to speak on stage with her. It was literally just like, oh my gosh, I’m going to meet Greta, like I was fan-girling a little bit. Actually meeting her in real life, it’s kind of crazy because she’s only like a year younger than me, and she’s a lot shorter than me. It was just, like, she’s so small but she’s so strong and she’s so powerful.

Braydon: What do you think of her campaign, encouraging people to go on strikes from schools on Friday to demand action to tackle this issue?

Mya-Rose is becoming a powerful and wise voice in the campaign to protect our environment, organising countryside camps for young people living in cities. She was also the youngest ever person to be awarded an honorary degree.

Graduation ceremony: By the authority of the University of Bristol, vested in my office, I admit you to the degree of Doctor of Science (Honoris Causa).

Meeting Mya-Rose has really opened my eyes to the crisis that we’re facing from climate change. It’s all very well, governments promising to give us rights as children, but if they don’t even try and tackle this climate crisis soon, all of our rights, like having a safe place to live, and even a healthy environment to grow up in, could easily disappear.

Mya: It’s really difficult as children to feel like you’re being heard but there’s so many little things that you can do that help so much. Whether it’s riding your bike more or recycling or eating less meat, but also I think making sure that your voice as a young person is heard, making sure that you’re going to protests and signing petitions – it’s so important at the moment. We’re passed the point of a wake up call, we’re passed the point of ignorance, we have to act now or we’re going to lose everything.

If your school is a first-time subscriber, view our recommended packages or build your own bespoke subscription. To upgrade an existing subscription, please contact us on 01371 851 898, weekdays 9.00am to 5.00pm, or email education@firstnews.co.uk.