AI: Are Robots Taking Over? 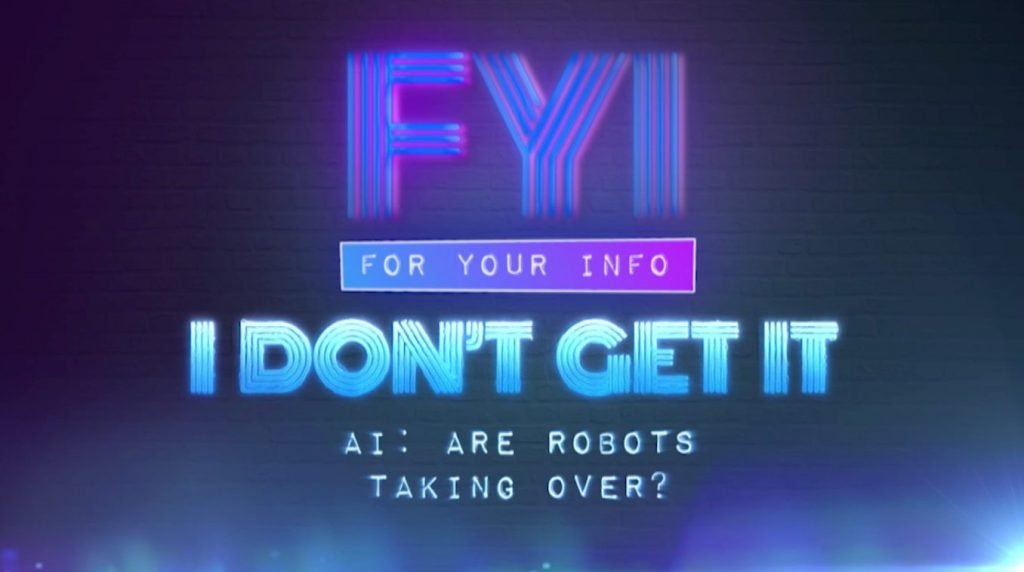 Sky Kids FYI presenter Braydon explores how Artificial Intelligence is changing our world. He asks whether the next generation of smart robots could soon replace humans in the workplace.

So, here’s the thing, right. Everyone’s been telling me that artificial intelligence is the future. If you’ve not heard of artificial intelligence, it’s the ability of machines to think like us humans. So we’re going to have robots helping us out, and they’ll be so clever that they’ll pretty much know everything. Hmm, I wonder if they could even be TV presenters!

How will artificial intelligence help us?

Here’s what I found out – artificial intelligence is already here! If you think about it, we’re surrounded by clever technology that can learn from us and help to make our lives easier. It’s even being used by the police to look out for criminals, and by hospitals to analyse X-rays and work out whether you need treatment or not.

And here are a few more examples that I’ve found. Smart speakers in your home that recognise your voice and do things like playing your music, switching on the heating or helping out elderly people, and navigation apps on your phone that can tell you the best way to get from A to B.

And the really exciting thing about this is that day by day the technology is getting better and better.

Tech journalist Georgie Barrat says: “Things are improving at an incredible rate. Just take as an example your mobile phone that everybody carries around in their pocket. That technology is so much more powerful that the computer that got the first man on the moon. And that’s just one example of how far we’ve already come.”

How will these advances help us in the next ten years?

“There are some things that are currently in development. So, by the time it comes for you to drive a car, there’s a chance you might not need to be able to take your driving test. That’s because the cars themselves will be able to drive. Self-driving cars have improved enormously in the past couple of years, and I’m sure we’ll see them on our streets quite soon. Not only that, when it comes to maybe ordering a takeaway, or you’re wanting to get something from online, it could turn up by a robot or a drone automatically.”

What else is in the pipeline?
“Augmented reality is going to become even more advanced. You may use augmented reality already, when you put those funny filters on your photos or use special effects, well that technology is starting to be used in glasses. So you’ll be able to look around the world and see all this extra digital information, whether that be notifications from your mobile phone or maybe what you’ll be looking at on the computer. what that means is that eventually we’ll be able to do away with our smart phone and computer screens. Instead, we’ll see all this information, just on the world around us.

Will robots eventually take over all of our jobs?

“Yes, robots will definitely take over some of our jobs, things that are really repetitive or manual, so if you think about a factory production line, or if you’re building cars. However technology will also bring about loads of new jobs. So if you’re nifty with a computer I can pretty much guarantee you’re going to be in high demand.”

So where’s all this going to end up? Some people worry that if robots become too clever they could start to cause us problems. But others say that technology will never be as advanced as humans, because a computer can’t feel emotions like joy or sadness in the same way that we can.