Why the simplicity of ‘said’ is the top choice for journalists

Teachers spend a huge amount of effort trying to get children to come up with words other than ‘said’ when they use speech in their creative writing. Words such as pleaded, gasped, argued, snapped, whispered, will help to make your dialogue more interesting, they say; they reveal character and create mood. And yet, when it comes to writing news reports, it turns out the opposite is the case.

For journalists, the simple word ‘said’ and its variants are the preferred choice for reporting speech. 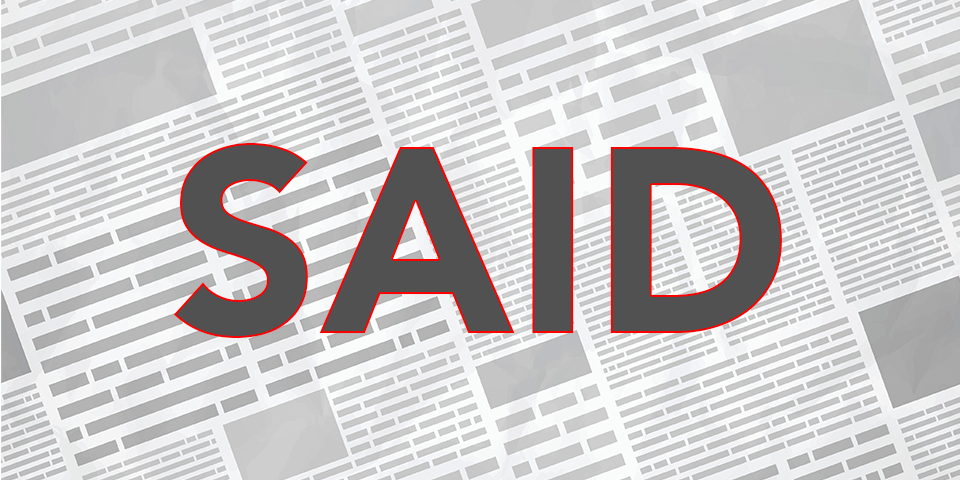 Here are some examples from First News.

“Pupils learn best in an environment where there are no excuses for bad behaviour,” said Education Secretary Gavin Williamson.

“I was always searching for her,” said Rozalina at the emotional reunion.

Sainsbury’s says it won’t be far behind, aiming to sell only free range eggs by April 2020.

As adults, we are so used to the conventions of news reportage that we rarely notice them, so it’s worth taking a moment to scan an article from a major news site to prove the point. It’s a useful exercise for children too.

You will find very few instances where the journalist has attributed direct or indirect speech with anything other than ‘said’. In fact, having just ploughed through the last five editions of First News for this blog, I have struggled to find many examples at all!

So, why is this? Journalists attempt to tell the news by letting the facts speak for themselves. They don’t offer their own opinion on the news that they are reporting; this is saved for columns such as the ‘Editor’s Comment’ in First News, where it is clearly flagged to the reader that the piece will contain personal opinion.

‘Said’ is plain, unnoticeable and neutral. As soon as the journalist starts to replace the word ‘said’ with a synonym, a degree of judgement creeps in.

“We must take every step necessary to keep our city safe,” said Councillor Paul Wood.

If there is an argument or difference in opinion, a better way to demonstrate this would be to have another quote presenting the alternative point of view, letting the reader come to his or her own conclusion. A skilled journalist should be invisible.

When discussing this with pupils, you can emphasise the point by asking them to imagine adding adverbs too.

Here, the adverbs inject an almost fictional tone into the writing and the veracity of the whole report comes into question.

There are of course other neutral synonyms for said – such as ‘uttered’ or ‘stated’ – but even these start to sound clunky and unnecessary next to the simplicity of ‘said’.

So, ‘said’ is by the far the most frequent form of attribution, but a few others come in handy.

Often used for short quotes and to flag an opinion:

The climate campaigner, 17, and human rights activist, 22, were described as “the two most influential young women of my lifetime” by TV host Piers Morgan.

Being a children’s newspaper, we perhaps do a bit more explaining than most, so this crops us quite frequently.

Keeper Jodie explains: “Dads don’t usually play a part in the upbringing of babies and won’t have a lot to do with them until they’re older.”

‘Tweeted’ and ‘posted’ are now essential forms of attribution to explain the written source of the quotation.

“It was smiles all round and we are happy to report that both Monty and the beach towel have lived to see another day,” they posted on social media after the op.

Subjectivity can be a difficult concept for children to grasp, and studying the use of this one word – the reasons for its use and the issues with the alternatives – can be a helpful introduction.

When you explain how to improve their news reports, your students may well say (complain/moan/joke) that you have ripped up the rules on ‘said’, but they will be better journalists for it!

In the director’s commentary of his new film, Johnson explains that Apple says “bad guys cannot have iPhones on camera.”

Download and print this handy Useful Alternatives to Said PDF for your class.